Entered China import duty for soybeans have fallen off the markets 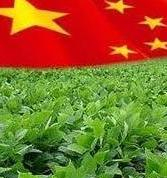 China Yesterday published a list of goods produced in the amount of US $ 50 billion, which will be imposed an import duty of 25%, which includes soy, corn and wheat.

As a consequence, in Chicago during the trading session, prices for soybeans fell by 4%, corn and wheat by 2%. However, at the end of trading the price of corn and wheat played the fall, while may soybean futures compared with the previous session lost 2.1% and is now trading at RUB 374.4 $/t

Despite the harsh rebuke, said China's willingness to negotiate and insist on holding them.

Probably, negotiations between the US and China will be announced soon, and yesterday was announced the visit to China, Secretary of the Treasury Mnuchin.

the Main asset of China is that it owns most of the us external debt, the refinancing of which so interested US that, perhaps, is the actual cause a trade war.

because of the fall of the Chicago stock exchange traders in Ukraine stopped purchasing or reduced prices for soy and corn. The introduction of import duties on U.S. soybean and corn will boost purchases by China of Ukrainian agricultural products, which will lead to further price increase.

Add a comment to news item: Entered China import duty for soybeans have fallen off the markets

Add a comment to news item:
Entered China import duty for soybeans have fallen off the markets