The Ukrainian grain crop may suffer from drought 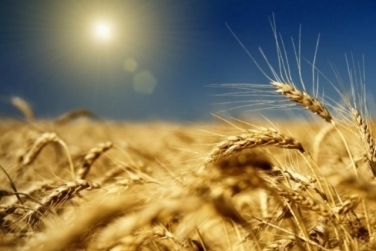 High in the majority of the time the air temperature, a sufficient amount of soil moisture has created good conditions for growth, development and yield formation all types selhozarteli. This is stated in agrometerology from the Ukrainian hydrometeorological.

In the early grain filling grain took place in nearly optimal conditions. Ahead of the actual development from the average over many years of standards development of most crops remained at the level of 1-3 weeks.

However, the cold night air that prevailed at the beginning of the decade, especially in the West of the country, where minimum temperature dropped to the level of +2 – 5 degrees, kept the vegetation of thermophilic plants and suppressed. The development of such plants has increased considerably since the onset of the heat.

In conditions of high humidity concurrently with temperature increase began to spread fungal plant diseases (Fusarium, Phoma, Septoria, etc.). On some fields with spring grain crops, where there is excess moisture in the soil, fixed the yellowing of the stem and leaves and sometimes lodging of crops.

during the month of may–June precipitation was distributed uncharacteristic way. Least recorded in the Western regions, where fell 45-80% of the norm. The rest of the rainfall was 120-300% of normal. At that time, in the North of the Rovno and Volyn regions fell 50-60 mm of rain in Kharkiv, Poltava and Mykolaiv oblasts fell 220-270 mm.

Heat, steady in mid-June and will dominate until the end of the month ambiguous impact on crops. While in the soil will have enough moisture, the warm air will contribute to the ripening of early grain and the intensive development of late crops. However, in the future there may be a proliferation of drought.

Previously, NASA predicted that the hottest in 2016 will be the summer months, however, while the record high temperature was established only in March and April.

Add a comment to news item: The Ukrainian grain crop may suffer from drought

Add a comment to news item:
The Ukrainian grain crop may suffer from drought