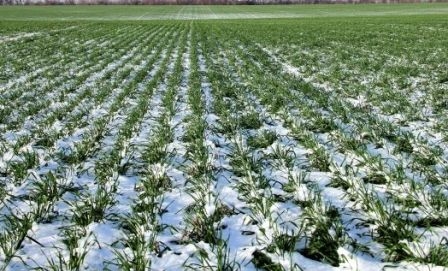 Traders are watching weather conditions in South America, complete sowing of soybean and corn, and in the Northern hemisphere, where the precipitation deficit, and in some places the lack of snow increases the concern about the fate of winter wheat.

In the Midwest USA this week have been heavy precipitation in the form of rain and snow. The promised decrease in air temperature will not harm the crops.

On the Southern and Northern plains late in the week rain and snow will improve the moisture of soil and light frosts are not dangerous for plants.

In Brazil next week will be moderate to heavy rains mostly in the Northern and Central regions. Weather conditions conducive to obtaining a good harvest of soybeans and corn.

In Argentina, in the States of Cordoba, Santa Fe and Northern Buenos Aires continue precipitation to improve the conditions of plant development. Projected for the West Buenos Aires and La Pampa the rainfall and the temperature of the air will reduce the moisture deficit that arose through the weak precipitation in the beginning of the season.

In the black sea region the weather remains unusually warm, with air temperatures for 2 to 13 degrees higher than usual. The precipitation deficit and almost nonexistent snowpack reinforces concerns regarding the fate of winter wheat in case of frost. In Ukraine and Russia next week, the lower temperatures are expected, but some places will be moderate rainfall that will replenish the soil moisture reserves.

In the Eastern and Central regions of Australia were the long awaited rains which weakened the forest fires, but was unable to stop them completely. The rains came too late, so will only be able to stop a further decline in yields.

Add a comment to news item: In the main regions of crop cultivation in addition to Ukraine and Russia last rainfall

Add a comment to news item:
In the main regions of crop cultivation in addition to Ukraine and Russia last rainfall