Ukrainian ports in the sea of Azov remain blocked 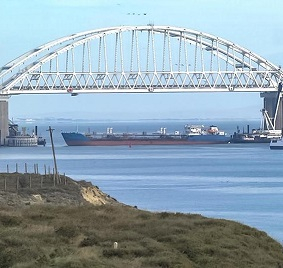 the Minister of infrastructure. Omeljan on own page in social networks reported that the approaches to Mariupol and Berdyansk ports remain blocked by Russia. According to him, on the evening of November 28 permit the passage of the Kerch Strait expected to 35 vessels.

in Particular, at the entrance to the sea of Azov are 18 ships, of which 4 are sent to Berdyansk, 14 in Mariupol. The queue for the exit from the Azov to the Black sea, 3 vessels waiting in the port of Berdyansk and Mariupol 6 in. Another 8 ships are located near the port berths.

"the Vessel is only moving to Russian ports of Azov, while domestic ports are blocked, which indicates targeted by the Russian side the discharge voltage in the Azov sea, aimed at destabilizing the region," he said. Emelyan.

the goal of the action from the Russian side the Minister considers systematic repression of Ukraine from the territories assigned to it by international law.

Earlier, Deputy Prime Minister for European and Euro-Atlantic integration. Klimpush-Tsintsadze said that the attack on Ukrainian ships in the Kerch Strait has once again confirmed intentions of Russia to Annex the sea of Azov.

Domestic foreign Ministry said about the act of aggression of Russia against Ukraine the Arbitral Tribunal, which considered the dispute between the countries concerning the violation by Russia of the UN Convention on the law of the sea in the Kerch Strait and the Black and Azov seas.

Add a comment to news item: Ukrainian ports in the sea of Azov remain blocked

Add a comment to news item:
Ukrainian ports in the sea of Azov remain blocked