The term of land lease in Ukraine will limit 7 years 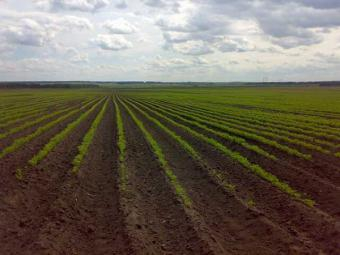 the Government approved a decree, which now to lease state agricultural land for up to 7 years according to the results of auction where the starting price will be not less than 8% of the normative assessment.

Derzeitiger should be put up for the auctions returned from the land lease, which will allow to eliminate the scheme whereby they were divided into plots of 2 ha and is distributed free of charge under the guise of land for personal farms. And of cause the previously concluded contracts in compliance with the new regulations, which will increase revenues to local budgets before the end of 2018 at 1 billion UAH, - told the Deputy Minister of agrarian policy N. Martyniuk.

the Regulation requires to limit the volume provided free land of 25% of the land leased through auctions, and the primary recipients of such parcels will be members of ATU, with the consent of local councils.

the Absence of a formal order of distribution of state agricultural land has led to systematic abuses. M. Martyniuk said that during 2015-16 62 were dismissed heads of regional and district offices, 53 detained by law enforcement, including 21 for a bribe.

Recall that by 2016 the majority of transactions were concluded for the term up to 49 years with a minimum rate of 3%. After the introduction in 2016 of the lease auctions has sharply increased the amount of land transferred free of charge under the form of plots of 2 hectares for private farms.

Until 2013, the distribution of land was carried out of the district state administration. Then it was signed 40 thousand rental transactions of more than 300 thousand hectares of land at rates below 3%.

Add a comment to news item: The term of land lease in Ukraine will limit 7 years

Add a comment to news item:
The term of land lease in Ukraine will limit 7 years