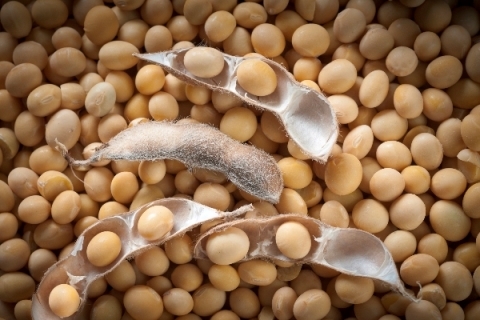 the USDA in its April balance of demand and supply of soybeans, virtually nothing has changed compared to the March estimate.

carry-over stocks of soybeans will increase by 0.2 million tons to 107.4 million tons. It should be noted that world production of soybeans in the 2018/19 season will be 6% more, and carryovers 8% more than last season.

For the United States balance of soybeans remained unchanged from the March estimate, and soybean futures remained steady after the release of the report, but yesterday showed a slight increase to 336,57$/t on the background information on the sale of two shipments of soybeans to an unknown destination.

Prices in the cash soybean market in South America continue to decline against the background of devaluation of the Argentine peso. According to the Agency Agrisensus the price of soybeans declined to the level: 322,5$/t FOB Argentina, 345,5-346,25$/t FOB Brazil, of 350.5 us $ /ton FOB U.S. Gulf and 371,0$/t CFR China for delivery in may June.

Brazil has already removed 84% of the area with soy and remains intriguing how many soybeans will gather this season, because in different States the yield varies greatly, due to adverse conditions in the South of the country. Local Agency AgRural raised its estimate of soybean production in Brazil, 1.7 million tons to 114.6 million tons, and an updated evaluation of analytical Agency CONAB we will receive today or tomorrow, but the March assessment is already much less than forecast by USDA.

it is Worth noting that the Brazilian representative of the USDA on Tuesday cut its forecast of soybean production in Brazil up to 113.6 million tonnes, which is much at odds with the 117,0 million tons in April, official report.

official Chinese media have called unrealistic timing of the summit for the harmonization of business transactions within the next four weeks, which continues to pressure prices for soybeans and would reduce the desire of American farmers to expand their soybean crops this season.

Add a comment to news item: The price of soybeans remains stable against the background of neutral USDA report

Add a comment to news item:
The price of soybeans remains stable against the background of neutral USDA report