Prices for soybeans, pending negotiations between the U.S. and China 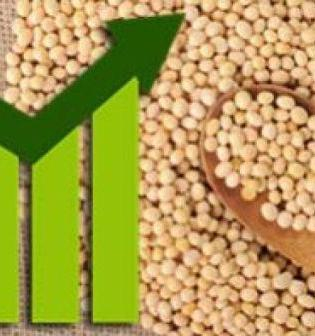 the U.S. Department of Commerce proposed to be held on 22 and 23 August trade negotiations between the US and China. They will be held for the first time since may of 2018, when the United States enacted tariffs on Chinese goods, and China has imposed countervailing duties on American goods, including soy.

the Representatives of the Ministry of trade of China believe that "the continuation of the negotiations will avoid the final rupture of Sino-us relations, although hopes the agreement is almost there".

After the decision of the parties to resume negotiations yesterday morning, the futures prices for soybeans in Chicago rose 3.5% to 330 $/t by updating a maximum of 5 days.

the trade negotiations gave hope for the solution of the conflict, but traders have doubts about a positive outcome.

the Export of soybeans from the U.S. last week fell sharply to 586,5 thousand tons, which is 21% lower than in last year, but that hasn't stopped the growth rates.

In China, arrived first batch of U.S. soybeans, which was paid for 25% import duties. In addition, it is known that one ship with 70 tonnes of us soybeans for almost a month circling off the coast of China because it on a floor of hour has not yet come to the port of destination prior to introduction of the duties, so the owner may not unload the goods in the hope of a quick solution to the trade dispute and withdrawal fees.

the Demand from China for Brazilian soybeans continues to decline because of reduced processing volumes and higher prices for Brazilian soy. According to traders, China has acquired at least three cargos of Argentine soybeans for delivery in September and October, and one Uruguayan soybeans at a price of roughly 432 $/t CIF China.

Add a comment to news item: Prices for soybeans, pending negotiations between the U.S. and China

Add a comment to news item:
Prices for soybeans, pending negotiations between the U.S. and China