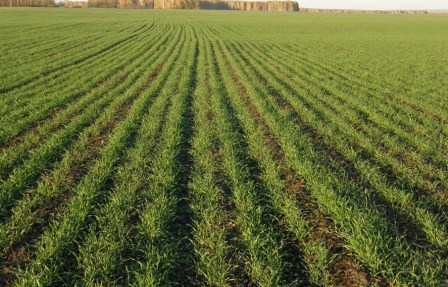 Weather conditions in the major exporting countries of wheat, contribute to the sowing of winter wheat. Precipitation, which took place in the United States, Russia and Ukraine, improved prospects of the next harvest.

In Hydrometeorological center of Ukraine believe that the North should be accelerated yet in all regions favorable weather prevails. Optimum time of sowing is over, however, the weather will give the farmers some more dry and cool days.

In Russia as of September 24 winter crops planted 11.5 million hectares or 67% of the forecast versus 10.3 million hectares on this date a year ago. For wheat allotted more than half the acreage, located mainly in the Central region is the main export potential of the country.

the Shoots of winter crops on nearly 40% of crops are in good condition, 60% - satisfactory. However, recent precipitation will significantly improve the condition of crops and these indicators will change for the better.

In the United States winter wheat planted 28% of the area against 26% on average for 5 years. Rainfall last week slowed the progress of sowing, but joined the reserves of moisture that will contribute to the development of crops.

In Europe, the pace of sowing is inferior to last year because of the summer drought and lack of moisture in the soil, especially in the Northern regions. Of particular concern is winter rapeseed, which has an earlier date of sowing. Number of sown acreage can 50% higher than the previous forecast, in addition, the stairs are very heterogeneous.

Experts believe that as a result of this situation, the European production of rapeseeds in 2019 will not exceed 20 million tons.