Dry and hot weather in the U.S. Midwest could reduce the corn yield 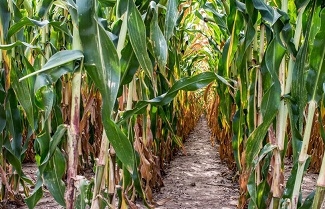 This week in the corn belt of the USA was dominated by dry weather with temperatures of 32-34 oC, which can adversely affect corn yield, which is in the flowering stage. Critical period in the growing season of maize is from 10 days before flowering and 20 days after flowering, which is crucial for yield formation. Lack of moisture at this time may reduce the yield potential.

In the next 7-10 days, dry and hot weather will continue in the East, Middle West, while in the Western part the rains and thunderstorms.

For the week, the number of corn crops in the United States that are in good or excellent condition decreased by 2% to 71% (compared to 57% a year ago), and the number of crops where started flowering as of 5 July was 10% compared with 7% a year ago and 16% on average for 5 years.

Heat on the Southern Plains of the United States will negatively affect the crops of wheat and cotton.

In the Northern Plains and the Delta region will be dominated by good weather without high temperatures with occasional rainfall, which will contribute to the development of crops of spring wheat, soybeans and corn.

Canada heavy sediments on the background of lower rates of air temperatures led to excess moisture and delayed crop development.

In the Central part of Brazil still dominates dry weather, which negatively affects the formation of maize second crop. Therefore, experts Conab reduced compared to the may estimates forecast corn production in the country in 2020 1.4% to 100,993 million tons, which is 0.9% higher than the harvest of 2019.

In Argentina next week are expected low temperatures with frosts that negatively affect the development of wheat crops. Due to prolonged drought in the Western and Northern regions, farmers have reduced acreage of wheat, 400 thousand hectares to 6.6 million hectares, bringing experts Grain exchange Rosario reduced compared with the June forecast of wheat production in the country from 21-22 to 18-19 million tons.

Australia's wheat growing areas next week will be showers and thunderstorms, which will contribute to the formation of a good crop of wheat.

In the South of Russia last week was dominated by dry and hot weather with temperatures of 34 to 38 oC, which had a negative impact on the yield of wheat and barley. From next week the temperature will drop to 30 to 32 oC and will be little precipitation. The amount of precipitation in the Central and Eastern regions is 30-50% below normal, which can reduce the yield potential of maize and sunflower.

In Ukraine, has a warm weather with periodic rainfall, which contributes to the ripening of wheat and barley, but also improves the condition of crops of maize and sunflower.

Dry weather in the EU in the next 7-10 days will facilitate the collection of winter crops, however, will reduce the potential harvest of late crops.

Add a comment to news item: Dry and hot weather in the U.S. Midwest could reduce the corn yield

Add a comment to news item:
Dry and hot weather in the U.S. Midwest could reduce the corn yield