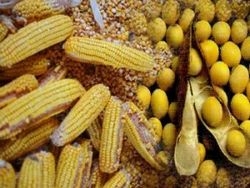 Yesterday's drop in may futures of WTI crude oil to negative values again confirmed that the price of goods determines the demand, and the lack of available containers increases the cost of storage.

Stop of the enterprises and restriction of movement of people has reduced the demand for fuel, and, respectively, for ethanol and biodiesel, which the United States is produced from soybeans and corn.

the Demand for corn and reduced feed manufacturers that suffer from falling prices for meat and overstocking of warehouses due to the reduction of domestic consumption and export demand from China.

corn Exports from the U.S. for the week decreased by almost half, to 640 thousand tons, which is significantly inferior to expert expectations and 2 times less than the same week a year ago.

the price of corn was not supported by a sharp rise of quotations of wheat, caused by dry weather in major producing countries, and forecast dry weather in Brazil, which completed the sowing of maize, the second crop safrinha.

the Market did not react to USDA promised a package of assistance to farmers in the amount of 3.9 billion $, which will provide compensation to 85% of the fall in prices from 1 January to 15 April (however, payments for one company will not exceed 125 thousand $).

Corn planted in the U.S. 7% of the planned areas compared to 9% average for this date.

In Argentina, the corn is collected on 33% of the area, and dry weather next week will allow to accelerate the collection and delivery of grain to ports.

soybean Market was supported by increased exports of soybeans from the U.S. for the week by 22% to 539,8 million tonnes, although China has shipped only 70 thousand tons.

Brazil has already collected in the soybean 92% of the area, which increases the volume of proposals on the world market. According to experts of Oil World, in April, the country is exporting 12 million tons of soybeans, primarily to China, while in March, exports amounted to 11 million tons, and in April 2019 from 9.4 million tons.

the Price of soybeans on FOB basis continue to decline, and now constitute 333-335 $/t FOB US Gulf for U.S. soybeans and 335 $/MT FOB Brazil for Brazilian.

Add a comment to news item: Plummeting oil prices have fallen off exchange quotes for soybean and corn

Add a comment to news item:
Plummeting oil prices have fallen off exchange quotes for soybean and corn