Speculators collapsed the price of wheat 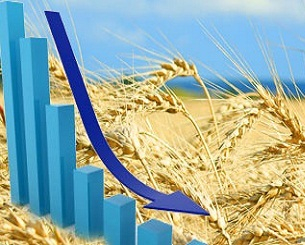 Weather conditions were the main factor of pressure on the stock price of the wheat.

Wednesday thanks to the active speculative sales of July wheat futures in Chicago fell almost 3%. This was the market's reaction to promised for the next decade of improving weather in the wheat belt of Canada and regions of cultivation of spring wheat in the United States.

the Market for French wheat on Wednesday dipped significantly despite the lack of fundamental reasons for this. Drought in major producing countries remains, moreover, the deteriorating situation in the North of Europe, in particular in export-oriented regions of Germany. The weak Euro is also affecting the prices.

However, investors decided that the market was too overbought after 6 days of growth with repeated update of the stock highs.

concern for the fate of the new wheat crop in Russia will keep the markets in suspense.

In the South of the country reigns a drought, whereas in Siberia it is snowing, what the sowing rate there is 2.6 million hectares less than last year and is the lowest since 2010. Spring wheat in Russia is planted 67% of the forecast or 8.7 million hectares versus 11.9 million hectares in 2017.

In Ukraine, the winter wheat crops are in good condition, however, the promise of next week are excessively hot and dry weather can negatively affect the development of plants.

Add a comment to news item: Speculators collapsed the price of wheat

Add a comment to news item:
Speculators collapsed the price of wheat