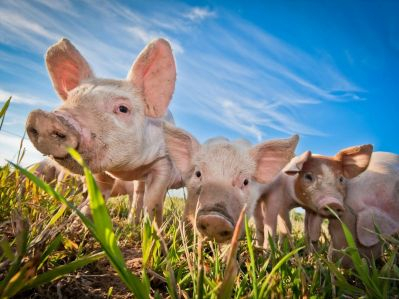 FAO Experts predict that in early 2018, the number of pigs in Ukraine will be the lowest in the years of independence, and amount to 6.1 million heads. In Soviet times, in 1990, in Ukraine, there were 20 million heads of pigs.

at the same time pork imports increased from 2.8 thousand tons in the previous year to 3.17 thousand tonnes in the period January-September 2017.

Pig farming in Ukraine began to decline significantly in 2015. Was lost the Russian market, the share of which in total exports of pork accounted for 93% (or 4.5 thousand tons in 2013). Domestic demand decreased due to the fall in the purchasing power of the population and is caused by rise in price of feed increasing costs. About 160 thousand heads remained in the occupied Crimea. Additionally worsened the situation of the abolition of the special regimes for VAT and spread of ASF in various areas of the country.

After the outbreak of ASF on a pig farm Kalita in the Kiev region in 2015 had to destroy 60 thousand pigs. Just since 2012 the country has recorded 270 outbreaks of ASF and destroyed 130 thousand animals. Today, the disease is rampant not only in private households but also on factory farms.

to Survive in such a situation can only high-tech farms that adhere to European norms of Biosafety. But it requires a significant financial investment.

reducing the profitability of pig production in previous years, ASF has led to reduced competition in the industry by reducing the number of farms. And the prices for pork in live weight has increased from 29 UAH/kg last year to 45 UAH/kg in the current, and in some places they reached 51 UAH/kg.

However, even a price increase does not give the possibility to increase the number of pigs in the near future. To support the producers could expand markets, but in terms of ASF on the contrary, they decrease. Recently, the import of Ukrainian pork has banned Belarus.

at present, 40% of pig meat produced 35 enterprises, while their total number is about two thousand. Interviewed 300 households owners confirmed the desire to increase population, upgrade or build new facilities. So the hope for gradual recovery of pigs in Ukraine starting from the following year remains.

Add a comment to news item: Reduction of population will lead to a further increase in the price of pork in Ukraine

Add a comment to news item:
Reduction of population will lead to a further increase in the price of pork in Ukraine