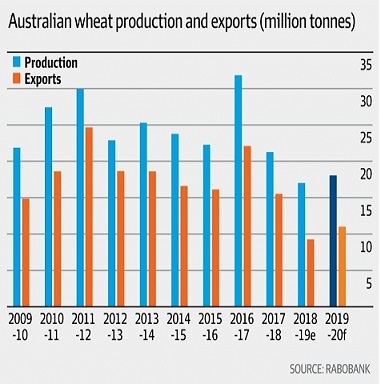 According to the forecast Rabobank, due to the drought in 2019 Australia will not be able to increase the sowing area and production of wheat to an average level, causing domestic prices of grain will remain at a high level.

In comparison with last year the acreage will increase by 1% to 18.3 million hectares, which is 13% below the average 5-year average.

According to official Federal government Agency ABARES, in 2018/19 MG grain production in the country fell by 20% to 30 million tonnes despite production growth in Western Australia by 21% to 17.1 million tons.

last year the wheat harvest in Australia amounted to the fewest in 10 years, 17.3 million tons and in the current season due to the drought in Western Australia it will not exceed 18 million tons.

wheat Exports in comparison with last year will increase by 18% to 11-12 million tonnes, which is 30% below the average 5-year average.

Analysts believe that the country may increase imports of wheat and other crops for the situation that has developed. So, Manildra Group, which is the largest buyer of wheat in Australia, imported to New South Wales wheat from Canada than struck the domestic market and local farmers.

the Hottest in the entire history of observations the summer and below normal rainfall after two years of moisture deficit resulted in too low soil moisture over large areas.

South Australia's water level is the lowest on this date 150 years, but in New South Wales and Victoria conditions for winter crops early in the season the best of the 2016-17 year. Experts say the restoration of the balance of crops between East and West after the Western Australia last year, collected most of the harvest of grain.

However, the current decline in acreage in Western Australia by 5% almost completely eliminates any expansion of acreage in other States.