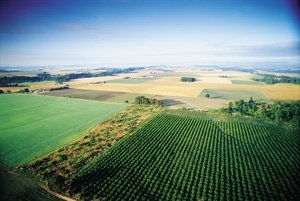 In October last year, Parliament extended for another year the moratorium on sale of agricultural land. This decision divided the society into two polar sector. However, less than a year, it is a question again you will need to raise, as the decision on the existence of a land market today is too important.

the Prime Minister of Ukraine V. Groysman during an interview with "UKRINFORM" said that the main reason the market closed today, the land sees the absence of a clear diagram, the functionality of the system of land sales in the case of the opening of the market.

"the Question of the necessity of the land market is debatable, and I'm ready to discuss it. Yet no one understands, what should be the market. Therefore, we first propose to develop a model, discuss it with the community, with the owners of the units, and then we will make the final decision. My opinion is. But if someone wants to remove the moratorium for several months to buy all the land in the country, I am totally against," - said the Prime Minister.

He also said that the moratorium will not be lifted "on command". However, in the case of the existence of a clear model of an open land market, can be an appropriate decision, however it is still early to talk about it.

"I Propose to first develop a model, discuss it, and then make the decision. As head of the government, I categorically opposed to someone in three months bought all the land in the country. I will not allow it. Only over the budget debate-2017 we worked for three months. And here is a more fundamental problem – the fate of the Ukrainian lands. So you need as openly as possible, at the expert level to discuss, to understand, to explain, and then make the final decision," - said Vladimir Groisman.

Add a comment to news item: Prime Minister of Ukraine decision regarding the opening of the land market

Add a comment to news item:
Prime Minister of Ukraine decision regarding the opening of the land market