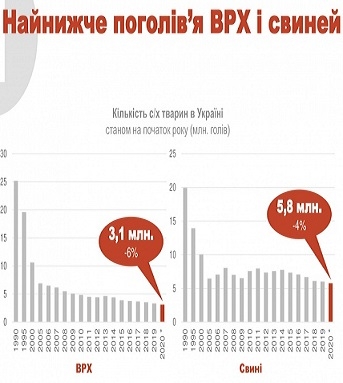 In 2020 the number of pigs and cows in Ukraine will fall to a historically low level that will affect the entire domestic meat market, - said at the conference "Meat business 2019" analyst of food markets FAO A. Pankratov.

According to his forecast, the number of cattle decreased by 6% to 3.1 million head, and pigs – 4% to 5.8 million head. By reducing livestock meat production will remain at 2019, but its future prospects remain uncertain, especially given the planned land reform.

the Experts noted the growth of productivity in beef cattle, the average weight referred to the slaughter of animals is gradually increasing, although the average age decreases. If in 2013 the pigs were given to slaughter at the age of 330 days, now this indicator has decreased by 18% to 272 days. This trend will continue in the following years.

meat Exports in 2019 compared to the previous year will increase from 395 to 472 thousand tons, of which the share of chicken is 410 thousand tons, which is 25% higher than last year's level.

Add a comment to news item: The number of pigs and cows in Ukraine falls to record low

Add a comment to news item:
The number of pigs and cows in Ukraine falls to record low