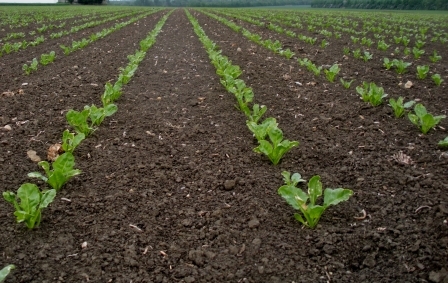 Meteorological conditions, which during the spring was formed over the territory of the country, contributed to the planting and development of crops.

In most regions the moisture level remains optimal, or satisfactory, heating of the upper layers of the soil made it possible to start early sowing late crops and contributed to the active development of winter plants.

In some areas, particularly the South, there is a precipitation deficit that lasts more than 3 months, causing concern for shaping the future of the crops. In many parts of the Kherson, Odessa, Nikolaev and Kirovohrad region rainfall in the current year amounted to 30-60% of normal. So the short-term reduction in temperature was beneficial because it kept the development of dry events. In some areas of the Kherson and Zaporozhye areas, the moisture reserves in a meter soil layer remains historically low and is 2-3 times less than normal.

the condition of the plants is good and satisfactory, in the southern regions wheat is sometimes affected.

the Condition of crops good, continuing stem growth and the formation of inflorescences. Of planted 899,2 thsd ha shoots were obtained for 98.6% of the squares, of which 46.9% of crops are in good condition.

Continues sowing of spring crops and observed the germination of grain on previously seeded areas, complete sowing of pea.