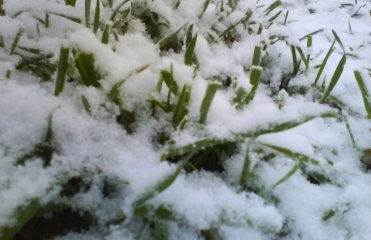 Lack of rain in growing regions of winter wheat in the US, most traders are concerned, and affects the price of wheat of the new harvest.

However, the growth of quotations restrains the good condition of winter crops in Europe, Ukraine and Russia.

In most regions of the EU sufficient snow cover contributes to the overwintering of winter crops, only in Germany there are risks of damage to the plant frosty air.

Due to the high layer of snow, the condition of crops in France is not significantly deteriorated even though the temperature dips. The average daily temperature in January was 3 degrees above normal.

More critical is the situation in Germany, where temperatures reach -10 degrees, especially in early winter a few crops have suffered from lack of precipitation. Analysts admit the deterioration of the crops, if the extreme cold will continue in the future.

In Poland, the weather promotes the overwintering of winter crops, and only in the North, crops were partially damaged by the floods. In the UK in separate regions recorded an excess of moisture in the soil, but crop condition is good.

According to the Ministry of agriculture of Russia planted winter crops, 17.1 million hectares at the end of January as 95% of crops is estimated as good and satisfactory. In the second decade of January in the European territory of the Russian Federation observed the unstable weather, but in General the weather conditions were satisfactory for wintering, that allows to hope for a good harvest of winter crops.

In Ukraine, the majority of the winter wheat crop is in good condition, which adds to the optimism about the future of the crop.