NBU controls the weakening of the dollar on the interbank market 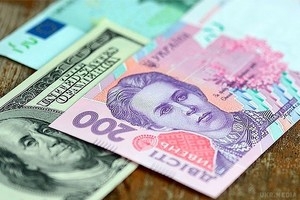 on Thursday, the strengthening of the hryvnia on the interbank market continued. Trading opened with quotations of 26.56/26,59, and ended by 26.53/of 26.56. However, if not for the actions of the NBU, the dollar lost would be much greater.

in early trading decided downward trend, and the sellers were prepared to sell the currency at 26,50 UAH/$. The hope remained only that the excess currency will buy the national Bank, and stop, thus the falling dollar.

After the rate fell to 2-3 COP, the regulator decided to support exporters and announced the auction to repurchase $ 50 million. After that falling of quotations has stopped, and market participants began to expect the price cut to determine further course.

At the auction, the national Bank acquired 30.7 million $ at the cut-off price of 26.56 above stated banks at UAH 33.5 million $, that is, almost the entire proposed amount. It freville supply and demand and the end of the session the dollar was trading at 26,53/of 26.56 UAH.

it Becomes clear the selected controller strategy for the Forex market:

This tactic allows the Bank to redeem large amounts of foreign currency to replenish international reserves, while ensuring the downward trend of the dollar.

From the point of view of the national Bank the same action can reduce exchange rate fluctuations with simultaneous replenishment of the gold reserves and to curb the depreciation of the currency. This time, however, the exporters reduced the profitability of foreign operations, as depreciation increases the cost of production by raising minimum wages, cost of energy, raw materials, and the like. Obviously, how long this situation can not continue, because the exporters patience has limits.

If the regulator will continue to play against the largest suppliers of currency into the country – they will reduce the volume of transactions and further restrict not too active in foreign exchange earnings. Instead of the banal "VD mu" part of the profits of the exporters due to the decline in the exchange rate, the government needs to take active steps to support the domestic economy to stimulate the production, to reduce the taxation of the real sector, to increase employment. Do it now, when there is a favorable situation for the hryvnia. Otherwise the fall will have to deal with a currency jumps, attributing to the mythical speculators the growth of the interbank market.

Add a comment to news item: NBU controls the weakening of the dollar on the interbank market

Add a comment to news item:
NBU controls the weakening of the dollar on the interbank market