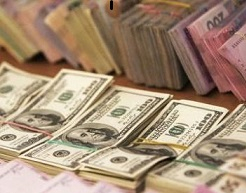 the Introduction of martial law in some regions of Ukraine became the main reason for the jump in the exchange rate. The population and business in anticipation of further devaluation of the hryvnia began actively buying foreign currency. Also caused by the increasing escalation of war with Russia, panic, pressure on the hryvnia budgeted for the end of 2018, the rate of 29 UAH/$.

the Cash dollar on Monday increased from 28 to 29 UAH/$ on Tuesday, but fell back to 28.5 UAH/$ with a stable interbank market.

But on Tuesday the speculative mood and got to interbank, the dollar rose to 28.12 with 27,88 UAH/$. Additionally on the market is pushing growth in balances on correspondent accounts to 59 billion due to the large VAT payments.

NBU at the meeting with the main banks informed them about the unchanged conditions of work in extreme conditions and asked to avoid speculative attacks on the hryvnia, and of providing a sufficient amount of cash in ATMs.

In anticipation of further appreciation of the importers try to buy sufficient amounts of currency, while exporters are holding back sales.

the Situation on the currency market will remain tense. It is clear that the hryvnia will remain at the level of 28.0 UAH/$, but it is unknown how it devalues. Main macroeconomic indicators do not work in favor of the hryvnia. The increase in the trade deficit, the withdrawal of investment as a result of escalating and so tense relations with Russia, which has already moved to open aggression, will put pressure on the exchange rate. However, the new tranche of the IMF loan and the world Bank on the background of the adoption of the new budget of Ukraine to support the hryvnia and will contribute to the development of the domestic economy.

Add a comment to news item: The national Bank kept the panic pressure on the hryvnia on the interbank market

Add a comment to news item:
The national Bank kept the panic pressure on the hryvnia on the interbank market