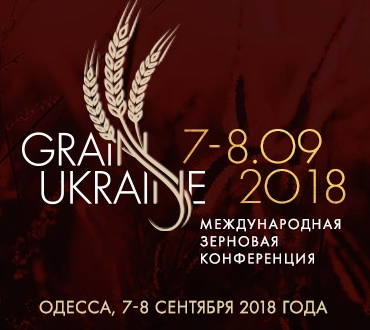 September 7-8, III international grain conference GRAIN UKRAINE in Odessa, will unite key market players and foreign speakers on natmosphere agricultural conference the black sea region. This year the focus of the expert Grain Ukraine2018 - the prospects of black sea grain in the season 2018/19.

Trade conflict between the United States and China contributes to the growth of export of Ukrainian grain crops. Although China is the world's largest producer of wheat, imports around 4 million tons of this culture. And when delivery from the States fell, it opened up new opportunities for Ukraine. As noted by Matt Ammermann risk Manager and Vice-President of FCM Division in Eastern Europe and the black sea region INTL FCStone Financial Inc. (USA), China is still extremely sensitive to price, so the price issue can help to strengthen Ukraine's position in Asian markets where it is already well established.

According to the International Grains Council in season 2017/18, the share of black sea wheat on the international market rose to 37%, surpassing the United States and Canada.

a Significant importer of products, especially maize, remains the EU. "Because now the EU has problems with the weather, expectations from the Ukraine are increased. And even if China will show growth of demand for Ukrainian maize, the EU can compete with him. China will likely try to establish the supply of other protein sources from the black sea to compensate for the lack of supply of soybeans from the United States. However, the growth of areas dedicated to soy, can interfere with the sunflower, because of the black sea region remains the world's largest exporter of sunflower oil. In the short term, the increase in area under soy seems like a difficult task: the sunflower, as before, remains one of the most profitable crops for Ukrainian farmers," emphasizes Matt Ammermann. A detailed analysis of the positions of the black sea grain on the world markets and latest trends Matt Ammermann grains and other international experts will share at the III International conference Grain Ukraine, which will be held in Odessa on September 7-8.

As of mid-July 2018 in Ukraine produced of 14.72 million tons of grain with a yield of 30.9 t/ha. It is the assessment of the Deputy Minister of agrarian policy and food of Ukraine on European integration Olga Trofimova grain conference Grain Ukraine. For several years Ukraine attracts more than 60 million tons of grain every year for the last 7 years exports of these products almost tripled.

Also, the conference will discuss infrastructure problems in Ukraine, climate change, and new markets of the black sea grain.

At a conference in Odessa will arrive more than 400 representatives of the agrarian sector to discuss the major challenges for the grain industry to find solutions to existing problems. Companies from 10 countries will take part in the Grain Ukraine.