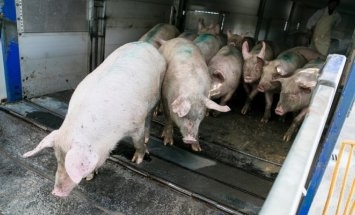 China continues to fight the spread of African swine fever, which after the outbreak in August, has already reached 24 provinces and regions. This time it was scored 916 thousand pigs after about 100 flashes of the African plague in the country, said Tuesday the Ministry of agriculture of China. African swine fever does not cause harm to people but lethal to pigs, vaccine or cure for it exists, if the animal miraculously survives the disease, it will always be a carrier.

According to Rabobank senior analyst Mr. Chenjun, in addition to pigs, which are killed on infected farms, many other animals were filled with farmers who seek to leave the industry through the influence of diseases on prices and trade.

Prices in some parts of the country for several months were at an unprofitable level after the introduction of restrictions on the transport after outbreaks of the disease.

According to Mr., the number of pigs in China may decline by about 20 percent in 2019.

This information has a negative impact on the market of soybean and soybean meal prices are reduced due to the prospects for reducing consumption. Chinese futures for soybean meal fell nearly 3 percent Monday after the new fire on a large farm, which was announced on Saturday.

demand for soybeans from China, reflected not only in the absence of purchases from the United States, but also in the slowdown in purchases from Brazil. According to analysts Agricensus the export of soybeans from Brazil in January will be less than 2 million tons, because for the first two weeks shipped just 1 million tons . Last year soybean exports in January was at the level of 1.5 million tonnes , but this season it was assumed that earlier harvest and high demand from China will significantly increase the volume of exports in January.

Add a comment to news item: Epidemic of the African plague in China continues to lower prices for soybeans

Add a comment to news item:
Epidemic of the African plague in China continues to lower prices for soybeans