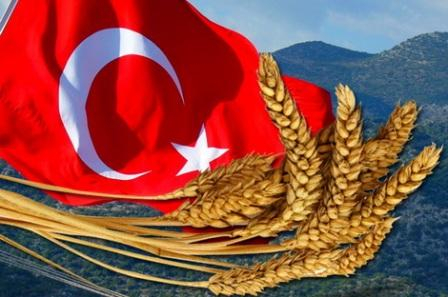 Ankara performs signed an agreement with Russia on the removal of trade restrictions, and spread by some media news about the new prohibitions do not correspond to reality, - said the Turkish Minister of economy in a written statement.

Previously, some sources have published information on the government's introduction of Turkey's new restrictions on the importation of wheat and sunflower oil from Russia, whose share in the total number of import licenses to domestic processing should be 20-25%, which will make possible duty-free import of products.

In the Istanbul exporters Union, said that part of the Turkish exporters independently made the decision to limit the import of Russian agricultural products to 20-25% of total imports, and the Ministry of economy has supported such actions. Perhaps this is due to Russia's refusal to lift the ban on import of Turkish tomatoes.

the Government of Turkey on 15 March changed the order of the import of certain agricultural products for further processing in the country, which was also the case of wheat and sunflower oil, however, Russia is not included in the list of countries that received permission to free delivery. This step is explained by Moscow's refusal to fully lift restrictions on the import of Turkish products, in particular tomatoes.

Turkey and Russia on may 22 signed an agreement on mutual elimination of trade restrictions, however, the ban of the import of tomatoes remained in force.

the Millers of Turkey will not be able to quickly find a replacement for Russian wheat that has a protein of 12.5%, as in the Romanian and Ukrainian wheat production protein usually is 11.5%.

Ukraine could obtain additional market of sunflower oil, however, the additional demand from Turkey is not seen.

Add a comment to news item: The fate of the export russian wheat and oil to Turkey remains uncertain

Add a comment to news item:
The fate of the export russian wheat and oil to Turkey remains uncertain