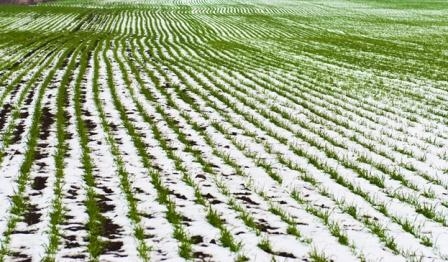 According to preliminary data of sprouting monoliths of winter (selected weather stations from the fields 25.01.17) significant damage and plant death was not revealed, reports Ukrainian hydrometeorological once agrost.

It is caused by a sufficient layer of snow on most of the areas sown and non-critical winter temperatures on the depth of the tillering nodes of plants.

In 12-59% of the samples from Mykolaiv, Ternopil, Kharkiv, Transcarpathian and Cherkasy regions recorded thinning in 11-20%.

analysts forecast Commodity Weather Gpoup, at least 10 days in many production regions of the United States will remain atypically warm for winter weather, which can bring out the winter plants from the state of hibernation and further stimulate the growing season.

In the Great Plains area in the near future the temperature will rise to 20-23 degrees and in the States of Nebraska, Texas and Oklahoma even higher. In the Midwest of the country the air warms up to 20 degrees, but cold at the end of February will slow down the development of grain.

the European Agency for the monitoring agricultural resources (MARS) reports that winter crops in the EU almost did not suffer from frost, while in January the temperature in the Central and Eastern regions fell to -15... 20 degrees. Slightly damaged crops in some regions of Sweden, Denmark, Germany, Hungary and Romania, and southern Russia.

Since the beginning of January to 17 February, the precipitation deficit is observed in the Central and North-Eastern Europe. The lack of moisture in the soil may hinder the successful conduct of the spring sowing.

At the same time, excessive rains were in southern Italy, the Balkans, North-West of the Iberian Peninsula, in Western Turkey and North Africa.

According to the Ministry of agriculture of the Russian Federation, weather conditions contributed to the wintering of plants, volume 96% of crops or 16.7 million hectares are in good and satisfactory condition.

Add a comment to news item: The good condition of winter crops gives hope for a good harvest

Add a comment to news item:
The good condition of winter crops gives hope for a good harvest