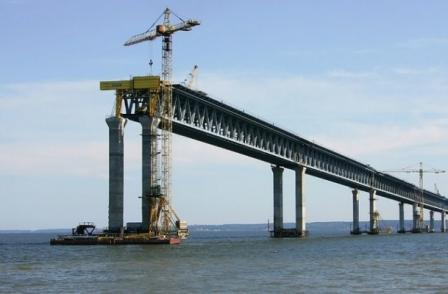 In June 2017, the Russian government stated that the court, which will pass under the arches of the Kerch bridge must have a length not exceeding 160 m, width 31 m, draught – 8 m, surface envelope – to 33.

After the construction of the arches of the new bridge under them will not be able to pass vessels of Panamax-type vessel and the middle class. With vessels of the middle class that send shipments up to 15 thousand tons, approximately 50-70% subject to specified restrictions.

If informed in Mariupol and Berdyansk ports could be loaded Panamax vessel with a maximum draft up to 8 m, through the new restrictions pass like ships in the Kerch Bay will be impossible.

at the same time, experts say, private sellers sell medium-sized trial batches with a volume of 5-8 thousand tons, while there is still potential for the development and delivery of competitive tariffs for transshipment.

currently, the Ministry of infrastructure is working on a program to reduce from 75% to 50% rate of dividend, to deduct the state stevedoring company in the budget. This will allow to increase the volume of transshipment of grain and food products GP "BMTP" 1.8 times – from 564 thousand tonnes to 1 million tonnes per year, which consequently will increase the number of cruise ship arrivals in the port.

After the introduction of Russian restrictions governments, the Ministry of infrastructure of Ukraine plans to appeal to the national Ministry of foreign Affairs to send diplomatic notes of protest to Russia with the appropriate complaint with the International Maritime organization, since the prohibition of the Russian government for the passage of large ships under the arches of the Kerch bridge can cause damage to Ukraine not only in security Sudost, but also to national security.

Add a comment to news item: The construction of the Kerch bridge will prevent large vessels from the Azov ports

Add a comment to news item:
The construction of the Kerch bridge will prevent large vessels from the Azov ports