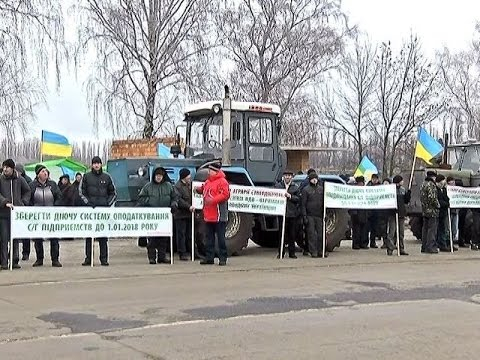 Several agricultural associations announced a December 19 National Assembly to address the issue of further actions aimed at the return of VAT reimbursement during export of oilseeds.

on Monday, they blocked roads in three regions of the country, and on Thursday, if there is no response from the government, will block the government quarter in Kiev.

Member of the Verkhovna Rada Committee on issues of agrarian policy Leonid Kozachenko said that the abolition of regulations on the VAT refund was made through private interest of certain persons.

"No state approach to the decision no. Conversely, it there are certain interested parties that have influence on the political forces of the Parliament. Obviously, they put a condition to the Government that in the event of failure of this solution will not give the votes for the budget-2018. But farmers would not support such speculation, which greatly straining the situation," - said Kozachenko.

currently the representatives of Ukrainian agricultural forum (VAF) call immediately to fix the issues of VAT refund and to create a transparent mechanism of distribution of budget assistance, as well as invite everyone to join the campaign.

VAF hope to cooperate with representatives of the tax, agricultural and budget committees. However, in the absence of dialogue with the government will raise the question of holding a nationwide strike, because the previous treatment had no results.

Add a comment to news item: Farmers demand cancellation of the amendments to the rules of reimbursement of VAT at export of oilseeds

Add a comment to news item:
Farmers demand cancellation of the amendments to the rules of reimbursement of VAT at export of oilseeds