The decrease in imports of soybeans by China slows, world exports 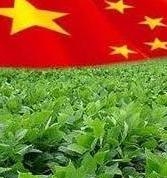 a reduction in the number of pigs in China and the economic slowdown led to lower consumption of soybean as the main raw material in the production of animal feed.

Experts Oil World report that for the first 2 weeks of July, Brazil has reduced exports of soybeans to 3.46 million tonnes compared to 5.28 million tonnes over the same period in 2018. In addition, soybean meal exports declined from 83 to 65 thousand tons, and soy oil from 77 to 39 thousand tons, which may indicate a decrease in the volume of soybean processing in the country.

According to estimates by USDA in 2019/20 MG Brazil exports 77,8 million tons of soybeans, which is 13% higher than the figure recorded for the current season. The growth of exports due to the fact that China will continue to give preference to Brazilian soy, which is cheaper than the us because of trade disputes with the United States is not quite solved. The export of soybeans from Argentina will remain at the level of the previous season's 8 million tons, which is 116% higher than the figure recorded lean 2017/18 MG.

Add a comment to news item: The decrease in imports of soybeans by China slows, world exports

Add a comment to news item:
The decrease in imports of soybeans by China slows, world exports