The threat of freezing under winter crops is missing 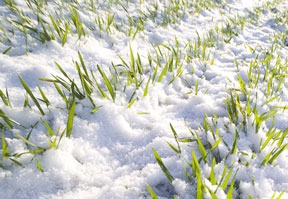 the Ukrainian hydrometeorological reports that the threat of a freezing winter because of the sharp fall of temperature of air at the beginning of the year is missing.

Head of the Department of agrometeorology T. Adamenko said that "currently, winter crops are in a state of winter dormancy and threats to their wymarzony no. Despite the fact that 17% of crops in early winter were mild and the liquefied condition in the course of the winter, their condition may improve".

In the Western regions of the country the temperature dropped to 20-22 degrees Celsius, but the snow depth is sufficient to protect plants.

According to the Ministry of agrarian policy, as of January 5, the sprouts of winter crops were obtained on 6.8 million hectares of planted 7.2 million ha, i.e. 95% of planted winter areas.

In good and satisfactory condition 83% germination, that is 5.7 million hectares 17% of the stairs or 1.1 million ha are estimated as weak and liquefied. 5% of crops or 359,4 thousand hectares of seedlings is generally not obtained.

In comparison with the previous season, the area under winter grains increased by 0.7% to 7,173 million hectares, in particular:

Under winter rape allotted 899 thousand hectares, which is 37.2% more than last year.

Add a comment to news item: The threat of freezing under winter crops is missing

Add a comment to news item:
The threat of freezing under winter crops is missing