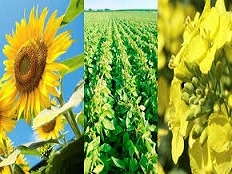 According to the may forecast by the USDA FAS, world oilseed production in 2020/21 MG will increase in comparison with the current season by 5% to 575,2 record 605,9 million tonnes, primarily due to the high soybean crop in the United States and South America, as well as increased production of sunflower and palm oil.

Evaluation world ending stocks of soybeans in 2020/21 MG in comparison with the current season reduced to 98,39 100,2 million tons due to an increase in forecast imports to China 4 million tons to 96 million tons on the background of the expected increase in processing volumes.

the Forecast of world consumption of oilseeds in 2020/21 MG increased 2% due to recovery in demand for feed in China after the stipulated two-year Achs fall of pork production.

the Volume of world trade of oilseeds will increase mainly due to the increased demand for soybeans in China and increase purchases of sunflower and rapeseed, while the trade volume of other crops is almost unchanged.

Add a comment to news item: The USDA forecast production of oil crops in 2020/21 MG will grow by 5%

Add a comment to news item:
The USDA forecast production of oil crops in 2020/21 MG will grow by 5%