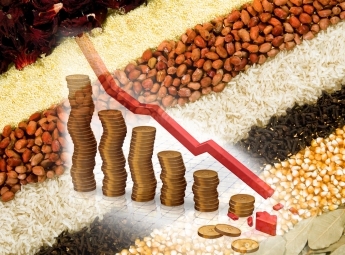 the Main news on the progress of the grain harvest in the United States and the black sea region concerning the advance schedules for the collection and the prices for grain on its own level for the new crop. In the U.S. collected 76% of winter wheat with a yield that can beat the record. However, the quality of grain is not the same in all regions, furthermore, a lower protein content compared to last year. In Russia 18.06.16 collected 20.5 million tons of wheat with a yield of 4.32 t/ha (2015-3,7 t/ha). It should be noted that 75% is food wheat. Ukraine threshed 42% of fields with wheat, harvested and 9.9 million tons with a yield of 3.82 t/ha in 2015 to 3.44 t/ha).

After the last procurement tenders, where Egypt and Algeria have purchased large amounts of grain from Russia, Romania and the Baltic States at the price 167-175 $ FOB (loaded on ship), wheat prices in Ukraine showed a slight increase to the following levels:

a Significant reduction in the price of soybeans in the United States, which occurred after a report of a good state of cultivation, influenced the price of rapeseed. She, after falling last week to 370$/t tried to test the level 385-387$/ton, but on Monday dropped to 380 $/t. Prices for rapeseed in elevators amounted to 10700-10800 UAH/t, but on Monday declined to 10600-10700 UAH/ton.

Increasing the number of proposals of peas led to a further decline in the price of $ 5 to $ 265 per tonne on a CPT basis in port.

Add a comment to news item: Grain prices have stabilized and looking up your level by 2016/17 MG

Add a comment to news item:
Grain prices have stabilized and looking up your level by 2016/17 MG