Wheat prices in the EU fall, grow in the US 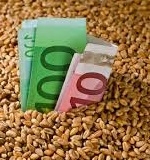 the Victory of French wheat at tender in Tunisia and the fall of the Euro against 1,1275 $/ I was able to keep from falling prices for European wheat.

in addition, Algeria, which is the traditional buyer of French wheat, has announced a tender for the purchase of 50 thousand tons of wheat, which adds optimism to European traders.

the slow pace of exports may increase the transitional stock, amid predictions of a good harvest will put pressure on prices. In the Ministry of agriculture of France reported that the winter wheat sown areas will increase in comparison with the previous year by 3% to 5 million hectares.

In the US, speculators heated exchange on the basis of political news. Trump said that he would not introduce from March 1 the duty on Chinese goods, and in March will meet with the President of China will sign a long awaited trade agreement.

the Futures contracts on soft wheat in Chicago are rising for the fourth consecutive session. Exchange supports strong demand in the physical market for U.S. wheat, which is now the cheapest in the world market.

In Ukraine on the background of strengthening of the hryvnia and under the influence of the Egyptian tender wheat prices at the port fell to the next level:

last week, Ukraine exported 345 thousand tons of wheat, and from the beginning of the season 11,95 million tonnes, 4% below last year's level.

Add a comment to news item: Wheat prices in the EU fall, grow in the US

Add a comment to news item:
Wheat prices in the EU fall, grow in the US