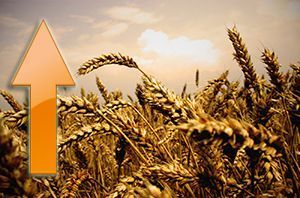 the Growth of quotations of winter wheat in the U.S., continued 4 trading days in a row. Monday March wheat futures in Chicago updated 10 November 2017, and hard wheat in Kansas city – high 26 Oct 2017.

Growing concern about the future fate of wheat crop in the United States. According Sunday monitor USDA in Kansas, only 14% of crops are in good or excellent condition, whereas at the end of December, the figure was 37%, and on the same date last year 44%.

Weekly exports amounted to 580 thousand tons of wheat, which is 37% higher than the previous week and 74.6% of the exports of the corresponding period last year.

the Market for French wheat rose after the Chicago and due to the weakening of the Euro to a new two-week high.

winter Crops in the EU due to the mild temperatures and abundant precipitation are in satisfactory condition, according to Strategie Grains in the January report. Precipitation throughout the EU resumed its supply of moisture, even in Spain, which suffered from drought in 2017.

winter Crops in Ukraine remain in a state of winter dormancy. A layer of snow sologig the soil and prevent its freezing, so the percentage of deaths will be minimal. Now the plants are in good or satisfactory condition.

Add a comment to news item: Wheat prices in Chicago continue to grow

Add a comment to news item:
Wheat prices in Chicago continue to grow