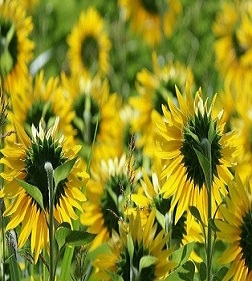 Dry and warm weather in Ukraine contributes to the rapid maturation of sunflower and higher rates of harvesting. Collected seeds have a moisture level of 7-8%.

the Increase in the supply of sunflower on the background of the containment of sales by farmers of wheat and barley through low procurement prices has led to a dramatic collapse of procurement prices from the processors, which from the beginning of the week fell from 10000-10400 UAH/t to 9200-9500 UAH/t with delivery to the plant. Through the shaft of the proposals in the factories formed a 2-4 day turn to unload. The processors almost stopped the purchase of ex-agriculture and mainly bought the sunflower on the elevators at a low price.

it is Worth noting the increase in supply of vysokouglerodistogo sunflower and reduce premiums for it. Last season the prize and the seeds grew to 120-150 $/t, which led to increase in acreage and offers, so now the prize has dropped to 40-80 $/t, which corresponds to the level of previous years.

Prices for Ukrainian sunflower oil for export in October and November remained at the level of 690-700 $/ton FOB in the January-February level 675-680 $/t FOB, but they will continue to push the fall in oil prices and palm oil.

Quotations of palm oil in Malaysia yesterday, fell 0.8 percent to 528 $/t due to the reduction of exports. According to SGS, in the first week of September, exports decreased compared with August by 29% to 337,57 thousand tons, while experts expected a decline in the range of 14-23%.

Despite lower quotations of palm oil and oil, prices of soybean oil in Chicago yesterday rose 1% to 637,8 $/t. the Market has supported the news about the meeting of the administration of the President of the United States with representatives of the petrochemical and biofuel industry, to work out decisions on increasing the share of biodiesel and bioethanol in the fuel.

Add a comment to news item: The price of sunflower in Ukraine over the week fell on 1000 UAH/t

Add a comment to news item:
The price of sunflower in Ukraine over the week fell on 1000 UAH/t