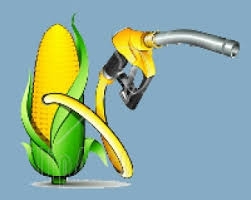 This price jump is due to the beginning of the month when funds are once again beginning active purchase.

Improved weather conditions in the southhemisphere  took the concerns about the decline in the gross collection. So now traders started analyze the sown areas under corn and soybeans in the USA. Farmers can reduce corn crops to 90.5 million acres due to low grain prices and high prices for soybeans.

increase the volume of corn processing to biofuels further supported prices. The production of bioethanol in the US reached a record level of 7,427 million barrels in weekly use 111,405 million bushels, or 2.8 million MT of corn. This is much higher than needed to reach the USDA forecast of 5.3 billion bushels (or 134.6 million tonnes per year) weekly processing within 98,116 million bushels.

the European Commission has reduced the estimate for ending stocks of corn this season, up from 15.9 million tons to 9.95 million tonnes, while last season they amounted to 12.18 million T.

the Reason for the decrease in the level of ending stocks was the planned increase in corn processing for bioethanol. It is expected that for the production of biofuels, EU uses 6 million tonnes against 5.5 million tonnes in the 2015/16 season.