Russia can collect a record 130 million tons of grain 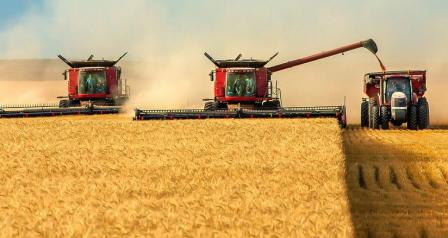 Promote the harvesting campaign in Russia gives analysts reason to adjust forecasts of production and exports of grain.

Analysts of the company "Prozerno" I believe that in the current year gross harvest of grain and leguminous crops in Russia will reach the record of 130.7 million tonnes, the Largest harvest was recorded in 1978, when threshed 127.4 million t Harvest even with the Crimea will exceed the previous record.

Experts warn that a record crop may cause problems with the storage of grain in certain regions.

the Export potential of the current season is estimated at 47-48 million tons, in particular:

IN 2016/17 MG grain exports according to the estimates of the Ministry of agriculture amounted to 35.5 million tonnes, including wheat – 27.1 mln tons.

In all production regions grain prices during the week fell by 10-20 $. The lowest level they reach in the second half of August.

Experts of the Russian grain Union has increased its assessment of exports to 42-43 million tons and production to 124 million tonnes, including wheat – 77,5-80 million tons.

the Forecast of the Ministry of agriculture remains at the level of 103-105 million tonnes.

Add a comment to news item: Russia can collect a record 130 million tons of grain

Add a comment to news item:
Russia can collect a record 130 million tons of grain