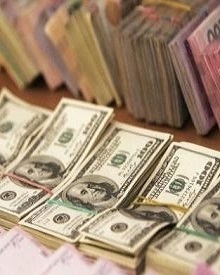 At yesterday's auction of government bonds the Ministry of Finance of Ukraine sold the securities at 17.2 billion hryvnia, in particular, government bonds with a maturity of 5.5 years and at rates of 15.5-16,75% per annum for 11 billion. The Ministry noted that the last auction was a record for attracting the hryvnia in the current year. Now the annual recruitment plan of state loans performed at 76.5%.

the national Bank actively bought currency surpluses and spent several interventions, first by purchasing $ 20 million to 25.20 UAH/$, then another $ 50 million to 25.10 UAH/$, and maybe even bought the currency anonymously through a system of Matching, which allowed the exchange rate to fall below the psychological mark of 25 UAH/$.

Exporters are not in a hurry to sell the currency in expectation of the growth rate, as exports of agricultural products in comparison with last year is slower, and the reduction of currency proceeds from loans and start payments for 6-month t-bills in August, can dramatically change the exchange rate trend.

the Validity of such a theory will become clear in the near future, because it does not take into account the growing influence of foreign buyers of domestic government bonds for the formation of the course, which was not observed in recent years, and it is possible to enter other investments from non-residents.

Add a comment to news item: Record sales of government bonds has strengthened the hryvnia to UAH 25/$

Add a comment to news item:
Record sales of government bonds has strengthened the hryvnia to UAH 25/$