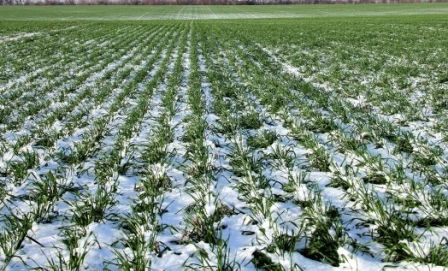 Monday wheat futures in the U.S. rose slightly on speculative news about the likely cold and a sharp intensification of the export of wheat during the past week.

Forecasters expect a significant temperature decrease in late December in the regions of cultivation of winter wheat. - For the delay of sowing durum wheat, due to dry weather in the South American Plains, the crops are too vulnerable to frost.

in the last week the export of wheat increased relative to the previous week on 65,18% to 585,6 thousand tons, which is 21% higher than the corresponding week last year.

the Market is not yet reacted to the forecast of the Ministry of agriculture of Russia, according to which the export of wheat in 2017/18 MG will increase to 40 million tons (USDA evaluates it at the level of 33.5 million tonnes).

With the support of the Chicago wheat exchange in Paris on Monday continued the growth which started yesterday. The main factor of growth of prices was concern about the condition of crops of winter crops on both sides of the ocean. First frost likely troubled experts of the USA, whereas in Europe in the near future do not expect frost. However, the MARS Agency reports that winter crops are very vulnerable to the cold snap.