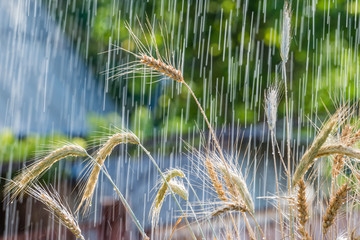 on Monday the price of wheat in the US and the EU rose sharply against the background of forecast further rain on the U.S. Plains and the Midwest that will reduce the sowing rate of spring wheat and significantly degrade the quality of winter wheat.

According to the NASS report, spring wheat sown in the United States 70% of the area compared with 81% on average for 5 years and expert expectations in the range 63-70%.

wheat Exports from the U.S. last week fell by 13.7% to 757,7 thousand tons, double the figure of last year. Overall in the season exported 23,58 million tons of wheat, which is 2.2% more than in the previous season.

Favorable precipitation significantly increased the crop in the major European countries-wheat producers – France, Germany, Poland and the UK, where there is a moisture deficit.

According to estimates by FranceAgriMer, in France 79% of wheat crops are in good or excellent condition.

Association of farmers ' cooperatives of Germany predicts that the harvest of wheat in the country in 2019 will increase by 19.8% to 24.28 million tonnes.

Experts CRM AgriCommodities increased the forecast of wheat production in the UK with 15.1 to 15.5 million tons.

In Poland, according to Sparks Polska's estimates, the wheat harvest will grow from 9.7 million tons to 10.9 million tons.

the EU Countries continue to increase exports of soft wheat, which this season has reached 18,382 million tonnes, just 1% below the corresponding indicator 2017/18 MG.

the Pace of sowing of wheat in Canada, the EU and Russia exceeds last year's, and warm weather and sufficient rainfall contribute to the development of a good harvest. Speculative growth of prices for wheat will be limited to weather conditions in the United States and the results of the sowing campaign.

Add a comment to news item: Powerful precipitation in the United States raised the price of wheat 3-mesyachnogo high

Add a comment to news item:
Powerful precipitation in the United States raised the price of wheat 3-mesyachnogo high