Winter crops in the main growing areas are in good condition 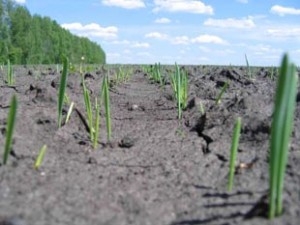 recently planted spring barley emerged seedlings, and in most areas was seed germination. Under crops of spring barley formed sufficient reserves of productive moisture in the upper 20 cm of soil 28-37 mm, at a depth of 1 m 121-152 mm.

In the U.S. state of winter wheat is worse than last year. According to the National clihospitals at MSG on April 2 in good and excellent condition were 51% of the crops (whereas in 2016, there were 59%), satisfactory in 35% (34%), in poor and very poor – 14% (7%). In the main regions of cultivation of wheat – the States of Kansas, Texas, Oklahoma and Colorado crop condition for the week slightly improved. According to the USDA report, the area sown under wheat crop 2017 will be reduced to the lowest since 1919 index is 46.1 million acres. In the past year from the area of 50.2 million acres were collected of 62.86 million.

In Russia, the condition of winter crops is estimated as good, can die only 3-4% of crops, - predicts the head of Department of plant growing of the Ministry of agriculture of P. Chekmarev.

according to the analysts At FranceAgriMer, France in good to excellent condition at the beginning of April are 93% crops of winter soft wheat and 82% of durum wheat.

Add a comment to news item: Winter crops in the main growing areas are in good condition

Add a comment to news item:
Winter crops in the main growing areas are in good condition