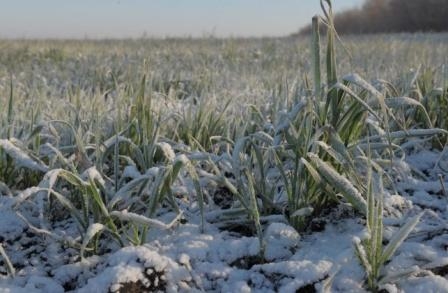 However, during this period it took part and in the southern regions of complete melting of snow cover and melt water filling the depressions of the relief, followed by freezing. In such places during 14-15 January, almost throughout the country there was a layer of ice with a thickness of 0.5-6.5 cm. the rest of the snow is compacted, especially in prirostov area. In some areas, with elevations of the microrelief of the snow not at all.

As earlier reported, sown for harvest in 2017 with winter grain 7.2 million ha of shoots were obtained on 955 space, which is 6.8 million ha As 83% germination or 5.6 million ha was estimated as good or satisfactory, but 17% of the stairs or 1.2 million hectares are considered to be weak and sparse.

Winter rape was sown 899,2 thsd ha, but the shoots were obtained on 96% of squares, which is 857 thsd hectares and 1.4 thsd hectares seedlings died. Among the resulting seedlings are in good and satisfactory condition 82% or 698 thsd ha, weak and thinned – 18% or 157,3 thousand ha.

Add a comment to news item: Winter crops are still in satisfactory condition

Add a comment to news item:
Winter crops are still in satisfactory condition