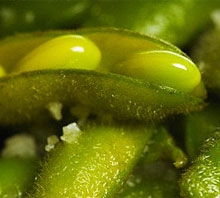 According to analysts Agroconsult, Brazil will be able to collect more than 107.8 million ton of soy. Whereas in a report dated 8 February, the harvest was estimated to 105.3 million tons. Approximately 61.1 mln tons will be exported, including 9 million ton in the near future, in February and March.

However, USDA estimates the Brazilian soybean crop in 104 million tons and exports at 59.5 million tons.

the soybean Crop in Argentina, according to Agroconsult, will decrease from 57 million tons last season to 54 million tons in 2016/17 MG, whereas the USDA predicts his level of 55.5 million.

increasing the supply of South American soybeans has led to falling of quotations on the stock exchange in Chicago from 383 to 377,27 $/ton during the week.

In Ukraine, the price of soybeans at the port due to high export demand remains at the level of 385-390 $/ton. During September-January 2016/17 MG the country exported 1,526 million tons of soybeans, which is 38% higher than in the same period of the previous season in 1,105 million.