Germany has joined France increased the forecast of rapeseed crop 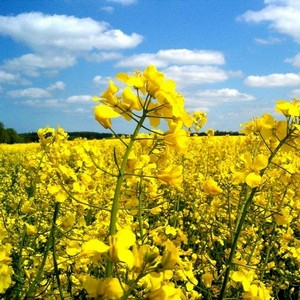 Due to the recent rains that fell in most parts of the country, the Association of German farmers (DBV) increased harvest forecasts of wheat and rapeseed.

this year the harvest of winter rape will increase by 4.7% in comparison with last year, and will be calculated 4,78 (weather in may to 4.68) million tons of Gross harvest of wheat will be 25.2 million tons ( 24,98 million tons). This figure is 3 percent more than the figure last year.

farmers Association also reports that planted crops are currently in good condition, so the productivity of each plant is quite high. Very dry weather in early spring had inspired the experts concerns about the possible deterioration of the grain yield, but rains have dispelled these doubts.

FranceAgriMer released its forecast for the EU countries in the production of oilseeds in the 2017/18 year.

European agricultural sector will increase the production of rapeseed in the 2017/18 season to 21.9 million tons, 2.2m. tons more than in the past, and sunflower - to 9.31 million tons, thereby increasing this figure by 0.71 m.tones.

the Price of rapeseed on Euronext yesterday was 358 euros per tonne, a decrease of 1.5 EUR.

Also slightly increase the production of soybeans - one of the major leguminous crops in the world, and will be 2.3 million tons (2.2 million ton in season 2016/17)

Add a comment to news item: Germany has joined France increased the forecast of rapeseed crop

Add a comment to news item:
Germany has joined France increased the forecast of rapeseed crop