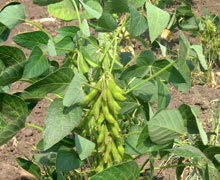 In February 2017 China imported a record for the last 7 years for this month 5.54 million tons of soybeans, which is 23% higher than the same period last year.

an Increase in purchases of soybeans due to the increase in demand from processors and build-up of refining capacity in the country. However, the import volume was less than expected market operators. Perhaps this is due to logistical delays.

Brazil in February sold a record amount of soybeans 3.51 million tons, which is 72% higher than in February 2016. Market operators assessed the Outlook export 5.7 million tons, but the wet weather slowed the harvest and led to logistical failures, especially in the Northern ports of the country.

In January-February 2017 Brazil exported 4.4 million tons of soybeans versus 2.43 million tons that were shipped in the first two months of 2016.

currently, the Brazilian traders do not have the capability of storing soybeans due to low activity of sellers.

the USDA Report, which forecast soybean production in Brazil increased from 104 to 108 million tons against the 96.5 million ton March 2015/16 has fallen off, soybean quotation on the Chicago stock exchange with 383 $/ton to 369,27 $/ton.