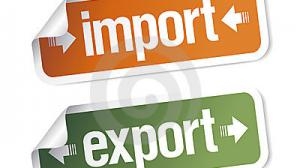 the foreign trade balance of Ukraine during the first eight months of the year 2016 according to Gostamsluzhby deficit 1,465 billion $, while during the same period of the previous year it had a surplus in 548,5 million dollars.

in Particular, in January-August of current year the volume of exports from the country decreased by 9% to 22,719 billion $ and imports by 0.9% to 24,184 billion dollars.

the Ratio of exports and imports amounted to 0,94 1,02 against last year.

foreign trade activity in the time specified was carried out with partners from 219 countries in the world.

Seasonal increase of imports during the autumn-winter period will increase the trade deficit, which will create additional pressure on the exchange rate of the national currency against the U.S. dollar.

Add a comment to news item: The state statistics service has reported an increase in deficit of foreign trade

Add a comment to news item:
The state statistics service has reported an increase in deficit of foreign trade