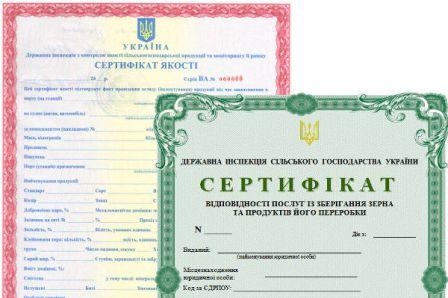 After the abolition of the State Inspectorate of agriculture certification grown in Ukraine, grain is not legally regulated.

the Ukrainian Association of grain producers says that "by law, imported or produced in Ukraine seeds must be certified, however, the Ministry of agrarian policy, who now transferred the relevant functions did not solve the issue about the structure, powers and funding of the future Agency".

Earlier, the State salgsinntekter had more than 500 laboratory technicians and inspectors who monitored the quality of the grain at all stages of production. From September 2014 the functions of the office were transferred Directorului, and then the Ministry of agrarian policy, on which is laid the requirements for registration. But expertise should undertake peer institutions, including non-state.

However, employees of the liquidated since October, the state agricultural inspection continue to perform their duties and up until now, because the Ministry has not yet established the work of the new Agency. Despite the significant downsizing of employees of the state agricultural inspection will issue quality certificates for grain before the advent of the new service. Those who ordered the certification of winter crops in a timely manner received the documents. Today being tested with maize and sunflower under spring sowing according to applications received before 30 June. Chairman slosser Yuri zastavny considers that talks about problems with the certification are not true.

However, the manufacturers do not agree with his position. Introduced in the summer of the Law "On seeds and planting material" does not recognize documents issued Dergisi. Therefore, certificates and orders of the Department have no legal effect.

Experts point out that virtually all of made in Ukraine seeds can't be implemented either in the country or abroad. Because of the inconsistency of the legislation in the near future can significantly increase the amount of counterfeit and illegally imported seeds.

Add a comment to news item: The imperfection of the legislation has led to problems with the certification of Ukrainian grain

Add a comment to news item:
The imperfection of the legislation has led to problems with the certification of Ukrainian grain